Get fresh music recommendations delivered to your inbox every Friday.
We've updated our Terms of Use. You can review the changes here.

by Miguel A. Garcia / August Traeger 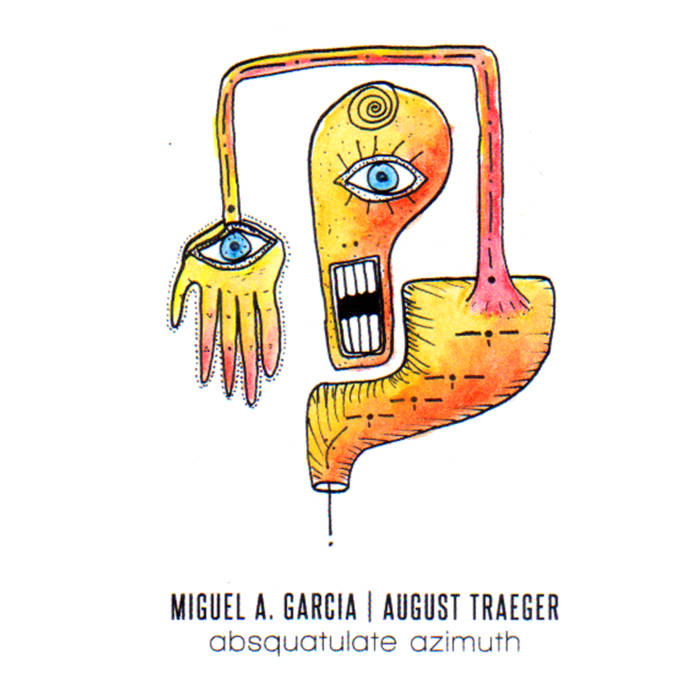 This is half of the third pair of a series of 8 cassette tape splits. All tapes are individually numbered & hand-painted. These are the personifications of death and decay, shining darkly in a bright room.

SIDE A:
Miguel A. Garcia
Miguel A. García (aka Xedh) from the Basque country, is one of the most dynamic sound artists in the Spanish scene. His work focuses mainly on the composition and electro-acoustic improvisation. He uses sounds taken from electronic devices residues, often interrelated with field recordings or acoustic instruments, in the search of an intimate, intense and immersive experience. A music of adventurous forms, full of contrasts and having nevertheless a sense of humor. His background comprises fine arts and audiovisual technology, having created projects such as Válvula Antirretorno, Baba Llaga or Mubles, questioning the borders between electro-acoustic academic music, industrial music and the so called outsider music.
With his solo project, he has participated in experimental music festivals all over Spain, as Ertz (Navarra), Experimentaclub (Madrid), Lem (Barcelona), Mem (Bilbao) or Sonikas (Vallecas), and he has played in diverse scenarios such as Auditorio Nacional de Música (Madrid), or museums such as Artium (Vitoria), Guggenheim (Bilbao), Macuf (A Coruña) or Vostell Malpartida (Cáceres). Outside Spain, he has played in festivals in Germany, Belgium, USA, France, The Netherlands, Norway, Mexico, Poland and Portugal. His work has been released worldwide by labels as Copy for your records (USA), Homophoni (USA), Pilgrim Talk (USA), Slaughter Recs (Italy), Trait Central (USA), Triple Bath (Greece), Zeromoon (USA), or White Line (UK).
Still a young member of the international free improvisation scene, he works regularly with Ilia Belorukov, Alfredo Costa Monteiro, Oier Iruretagoiena, Xabier Lopez, Alvaro Matilla or Seijiro Murayama. He has collaborated with arists such Lali Barriere, Heddy Boubaker, Alexander Bruck, Raul Dominguez, Jean-Luc Guionnet, Richard Kamerman, Kurt Liedwart, Nick Hoffman, Wade Matthews, Jorge Nuñez, Carlos Suarez or Valentina Vuksic, and bands like Cooloola Monster, Gora Japon, maDam or Hamburguesa Vegetal. As a promoter, amongst other projects, is the founder of the Club Le Larraskito and director of the Zarata Fest, both platforms dedicated to the broadcast of challenging art and music.
web: www.xedh.org

Bicephalic Records is a DIY label for experimental music with limited small runs of cassettes, records, and cds.

Bandcamp Daily  your guide to the world of Bandcamp

The Hammer and The Relentless from the Boston band Malleus stop by for a chat.